Discover the Difference with Krill Oil

Omega 3’s are the good fats that are essential to our diets today and are needed on a daily basis for our bodies to stay in tip-top shape. They are referred to as the Essential Fatty Acids- essential because our bodies do not produce this fat so therefore we must obtain it through our diet. Fish oils have been the main go to source for omega 3’s over the years but new research shows there is a superior source available that has remarkable properties far outweighing the “horse” pill counterpart. Studies have shown that consuming 1000mg’s of Krill oil yields the same effects if not better than 3,000mg’s of fish oil.

Dr. Oz lists omega 3’s as 1 of the 5 critical vitamins every woman should take, 1 of 5 daily nutrition needs and as one of the most important steps expecting mothers can take to promote their baby’s healthy development. The American Heart Association has been urging everyone to eat fish at least twice a week to gain the benefits from omega 3’s. However, Dr. Mercola, one of the top leading alternative physicians, warns of the dangers of consuming these highly contaminated farmed aquatic creatures. He even goes as far to say that most fish oils sold today are contaminated as well as rancid due to their low amounts of antioxidants causing the oils to oxidize rapidly- one of the causes of the not so pleasant fish burps and aftertaste. So how do we get omega 3’s without the toxic side effects? Let’s look at what the fish consume that makes them rich in omega 3’s.

Krill are tiny shrimp-like crustaceans that reside in the deep waters of the Antarctic Ocean.

Being one of the lowest species in the food chain, krill do not pose a threat of toxic metals and harmful substances. They hold very unique properties that allows for better absorption of the omega 3’s and a powerhouse of antioxidant potential. That is just one reason why we chose Krill oil as our Essential Fatty Acid source in the Core EFAs.

The Omega 3 Difference
Omega-3 fats come in various forms. Some are more readily available to the body than others. Fish oil’s omega-3 fatty acids are made up in the triglyceride form, whereas in krill oil, they are in double chain phospholipid structure. Why is this important? Well, the make-up of our cell membranes especially the brain tissue is already in the phospholipid form therefore, it does not require the body to convert a less beneficial triglyceride to a phospholipid. Because of this unique structure, EPA and DHA in krill oil are more absorbable. They can easily pass through the mitochondria, the powerhouse of our cells, and the cellular nucleus allowing for maximum absorption and utilization. Nutrient utilization over nutrient consumption!

Antioxidant Powerhouse
Krill oil naturally contains astaxanthin, a remarkable antioxidant from the carotenoid family. Krill themselves consume phytoplankton, a tiny one celled plant high in astaxanthin, which enables them to be an amazing free radical fighter. Astaxanthin is extremely unique in that it can combat many different types of free radicals simultaneously. Other antioxidants can only handle one type of free radical at a time and can become depleted from neutralizing free radicals but this does not appear to occur with astaxanthin. The EPA and DHA structure of Krill oil allows direct metabolism of antioxidants, thereby increasing their bioavailability. Astaxanthin being the most notable antioxidant in Krill oil is not the only one. Krill is rich in Vitamin A, D, E and canthaxanthin, a potent antioxidant. When compared to fish oil, Krill oil’s antioxidant potential is 48 time higher on the ORAC (Oxygen Radical Absorbance Capacity) scale!

Brain Health
Our brains are made up of approximately 60% fat and when we do not consume the good fats on a daily basis, deficiencies will begin to arise. Deficiencies of DHA, the main fat essential for feeding the brain, may increase our risk of depression, memory loss, diabetes, attention deficit hyperactivity disorder (ADHD), cystic fibrosis, Alzheimer’s disease, autism, nervous system disorders, psychiatric disorders, alcoholism, sleeplessness, mood swings and behavioral problems. Due to the unique phospholipid structure of Krill oil, DHA is readily absorbed and utilized by the brain tissue allowing for an improvement in these ailments.  Studies show that astaxanthin has the ability to cross the “blood-brain barrier” that protects the brain even further from harmful substances and free radical damage- one of the leading causes of nervous system disorders. DHA in the phospholipid structure is also key to having sufficient serotonin receptors which low blood serotonin levels are associated with depression. So not only is the fat structure of utmost importance in Krill oil but also the antioxidant potential is crucial in supporting the brain health.

Eye, Skin and Heart Support
Our eyes much like our brains contain high amounts of omega 3’s in the phospholipid structure due to the many nerve endings. Free radicals and UV

light damage impair our vision as well as our skin. Astaxanthin along with the essential fats in Krill oil guard against macular degeneration and oxidative damage, often just thought of aging symptoms. It also protects the skin from the harmful ultraviolet rays of the sun. EPA, the anti-inflammatory essential fat, helps to reduce inflammation throughout the body but is particularly important for the skin where acne and psoriasis manifest themselves. Studies have shown improvement in the overall skin appearance from reduced redness and itching to improved hydration and less wrinkles with the use of Krill oil.

Omegas 3’s have been well established at reducing your risk of heart disease. The notable difference with Krill oil is that it is remarkable at reducing cholesterol levels. Research has proven that with consuming Krill oil, the HDL, good cholesterol, has been improved by up to 50% and the LDL, bad/lousy cholesterol, has been decreased by about 35%. This is due to the unique fat structure inherent to krill. Astaxanthin also addresses this area in that it helps to reduce the oxidation of LDL which causes the narrowing of arteries. So not only is the LDL reduced but also the plaque built-up therefore allowing for more circulation and oxygenation of the tissues. Krill oil is also effective at reducing glucose levels which allows for better blood sugar regulation for those who struggle with diabetes.

Anti-aging and Pain Management
Aging is merely a sign of oxidative stress on the body. Oxidative stress can lead to many life threatening illness such as cancer and cardiovascular disease just to name a few. That is why antioxidants have been a hot topic for quite some time. One of the best antioxidants and free radical fighters is astaxanthin. It alone is 550 times higher than Vitamin E and potentially 800 times higher than CoQ 10 and Vitamin C. Krill oil packs a one, two punch at free radicals and the early onset signs of aging.

Inflammation is thought to be the root cause of all disease. Inflammation arises when we have an imbalance of fats in the body- more bad fats (omega 6’s and trans fats) to good omega 3 fats. Since Krill oil is far superior in the fat structure, it will provide the balancing effect that is crucial to maintaining an anti-inflammatory state in the body.  Research has concluded that taking merely 300mg’s of Krill Oil (Core EFAs provides 1000mg’s) has significantly alleviated inflammation, pain and arthritic symptoms in just a week or two.  Krill oil has also been found to be significantly superior at relieving PMS discomfort as well as dysmenorrhoea, a condition characterized by severe uterine pain during menstruation. For overall pain management, Krill oil cannot be beat! 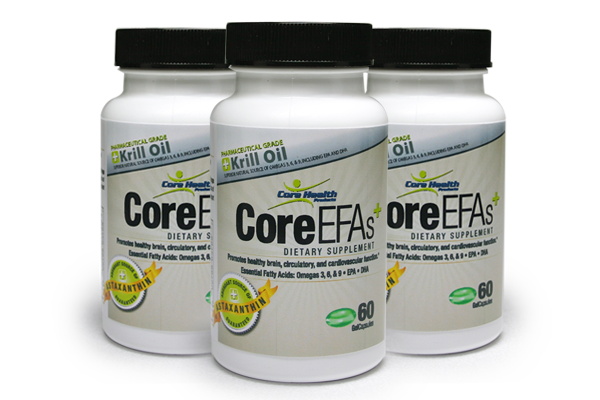 I need Core EFAs if:

Your body deserves the best nutrition possible and with all the science and research behind it, Core EFAs provides just that with our Pure Krill oil. Its superior phospholipid structure and remarkable antioxidant potential is unsurpassed by any other fish oil on the market.

We deliver the best with Core EFAs because you deserve the best!

Let the discussion begin…Post your comments below!